via
Overall this movie is just fantastic.  The acting is solid, I did not see anything as predictable (I have not read the books), and I was engaged for the entire movie.  I was anxious in certain scenes wondering was so and so going to die, how were they going to pull it off, etc.  Also I love the cast.  These are some of my go to actors where you just know the movie that they are in is going to be stellar.

Pros
**Keira Knightly is in the movie.  I mean if you can watch her movies and not believe her roles and just not love wow I don't know if I would believe you.
**Chris Pine is in the movie.  I have not seen Star Trek or any of his other movies beyond the Princess Diaries (and didn't know that was him until I just sat down to do this review), but I have always been a fan based on his demeanor in the press.  He did not disappoint at all.  I believed he was Jack Ryan (and yes I have seen the other movies with Harrison Ford, Alec Baldwin and Ben Affleck) and in fact has been my favorite Jack thus far.
**Kevin Costner stars in the movie.  He is the strong mentor, character and one that you just know will hold his own in a movie.  This movie is not the exception, he does a superb job.
**The action scenes were graphic.
**It was not predictable and I loved how the ending came together.
**The dialague between Jack Ryan and his mentor played by KC was humorous, engaging and just enjoyable. 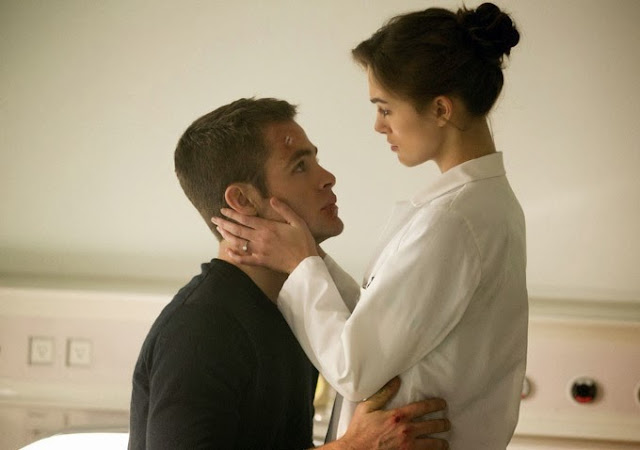 via
Cons:
**The move from Analyst to Active Agent seemed odd, just well you are active have fun was kind of how I felt that part was handled.
**The jumps between time periods was a bit rough at times, but it was quite easy to catch up.
**The climax of the movie seemed a bit trite in how they solved the main problem.  I mean wouldn't there be some structural concerns of a gigantic magnitude?

William Harper: [waiting to see the president] Any way you can get that boy-scout-on-a-field-trip look off your face?
Jack Ryan: [big smile] Not a chance.
William Harper: That's what I like about you.

What were your favorite parts of the movie? Have you seen the other Jack Ryan movies? Or do you prefer the books?
movies review