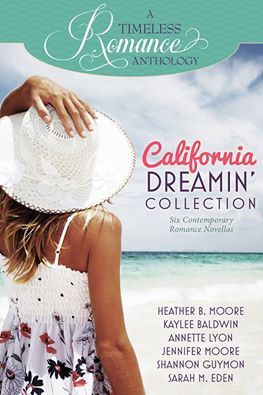 Book Summary (Per Goodreads)
Six brand new contemporary romance novellas with bestselling and award winning authors.In the sweet novella TOO GOOD TO BE TRUE by Heather B. Moore, Gwen uses her wedding photography business to keep her life simple and focus on something other than her own broken heart. When Jack, a guy too handsome for his own good, helps her clean up after a photoshoot, then asks her out, she doesn’t know if she can handle dating again. But Jack’s charm wins her over, and she agrees to meet him for dinner. The more she gets to know Jack, the more she likes him, but everything about him seems too good to be true. GONE FISHING, a charming novella by Kaylee Baldwin, follows Claire as she tries to convince her dad to leave his start-up company as a boat guide and come back home to Colorado. He’s the only one who can defend Claire against her domineering mother. But when she arrives at the San Diego harbor, she’s met with more than one surprise. First, that her dad is truly living his dream and has never been happier, and second, she’s unexpectedly attracted to his business partner, Miguel.In THE PIER CHANGES EVERYTHING, an enchanting novella by Annette Lyon, Alexandria has one last task to perform for her late husband, who died much too young: scatter his ashes in the Pacific Ocean. She goes to the Santa Monica Pier to do just that, but her plans get sidetracked after meeting Michael and feeling an immediate connection to him. They grab lunch, and the more time they spend together, the more they discover that they have in common—including past romantic hardships. As the day wears on, Alexandria begins learn that her heart just might be able to find love again.In Jennifer Moore’s captivating novella A HERO’S SONG, AnneMarie’s career as a romance novelist is skyrocketing and her agent books her on a late night talk show. The host gets her to admit that she was in love once, with a guitar player. Moments after her segment, Lance Holden appears on the same stage, to perform his newest song. Is it a terrible coincidence? AnneMarie hasn’t seen Lance ever since he broke her heart ten years ago, and she has refused to think about him again. Their lives are worlds apart, but as Lance tries to reconcile with AnneMarie, she finds herself taking a second chance. In STAY WITH ME, an endearing novella by Shannon Guymon, Jolie moves to L.A. to take on a nanny position for the summer, since apparently having a degree in art doesn’t translate to getting a job as a graphic designer. When Fitz, the family’s chauffeur, picks her up at the airport, she wonders if every man in LA is model-gorgeous. When Jolie meets her two charges, she finds them adorable and needy. But it’s harder to hold onto her job than she thought with a hostile Mrs. James and her spoiled brother. Fitz becomes both the silver lining of her job and the man who just might convince her to stay in L.A.In the delightful novella, A PLACE TO CALL HOME, by Sarah M. Eden, Ada is the best realtor around. The best. She prides herself in matching each client with the house that will fit all of their needs. She hasn’t failed yet. So when Craig hires her to find him the perfect condo for him and his son, Ada is up for the challenge. What she may not be prepared for is her unforeseen attraction to Craig, her immediate attachment to his nine-year-old son, and her heart telling her that it’s okay to take another chance.

My Thoughts
So good.  So, so, so good.  Each story is a very light and quick read that delves into some serious topics at a surface level which makes these characters relate-able and enjoyable.  This anthology flowed together in that every story was based in California, but was different from the last anthology I read that was all based in one town.  Even taking on the entire state I thought the stories played well together, supported each other and at the same time was independent from the others.  After reading the entire set of stories I was happy to see that each story was still in my head, the characters were still in their respective stories and I could enjoy how every story reached its conclusion.

Since these stories do not really tie into each other with character overlap or development I feel that one could read these stories separately or all at one time.  I enjoyed all of the stories, but I must say that in this anthology I enjoyed GONE FISHING the most.  Several others were close to being my favorite, but I thought this story had such clear characters, rich development of story and while I was expecting the ending, I loved seeing how the character got there!


Disclaimer: I received this book in exchange for an honest book review.  All thoughts and opinions are my own.
books review