The Book of Joan: Tales of Mirth Mischief and Manipulation by Melissa Rivers, Book Review 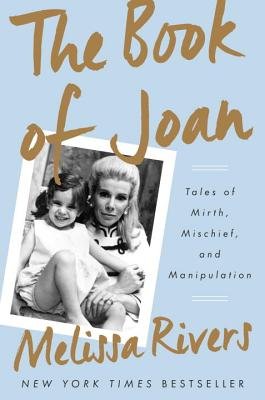 Book Summary (per Goodreads)
Joan Rivers was known all over the world—from the Palace Theater to Buckingham Palace, from the bright lights of Las Vegas to the footlights of Broadway, from the days of talkies to hosting talk shows. But there was only one person who knew Joan intimately, one person who the authorities would call when she got a little out of hand. Her daughter and best friend, Melissa.

Joan and Melissa Rivers had one of the most celebrated mother-daughter relationships of all time. If you think Joan said some outrageous things to her audiences as a comedian, you won’t believe what she said and did in private. Her love for her daughter knew no bounds—or boundaries, apparently. ("Melissa, I acknowledge that you have boundaries. I just choose to not respect them.") In The Book of Joan: Tales of Mirth, Mischief and Manipulation, Melissa shares stories (like when she was nine months old and her parents delivered her to Johnny Carson as a birthday gift), bon mots (“Missy, is there anything better than seeing a really good looking couple pushing a baby that looks like a Sasquatch who got caught in a house fire?”), and life lessons from growing up in the Rosenberg-Rivers household (“I can do tips and discounts and figure out the number of gay men in an audience to make it a good show. That’s all the math you’ll ever need.”). These were just the tip of the iceberg when it came to life in the family that Melissa describes as more Addams than Cleaver. And at the center of it all was a tiny blond force of nature.

In The Book of Joan: Tales of Mirth, Mischief and Manipulation, Melissa Rivers relates funny, poignant and irreverent observations, thoughts, and tales about the woman who raised her and is the reason she considers valium one of the four basic food groups.

My Thoughts
I remember being shocked when I heard Joan Rivers had died.  She had been somewhat of a staple in my life.  Every award show, shocking comedy reviews, fashion news, etc. I could count on seeing Joan on TV and finding something humorous to say.  While I was not an ardant or even somewhat follower, I always enjoyed watching her on TV when I came across her shows.  However, during all the shows covering her death I learned so much about her that made me want to know more!  What a force of nature, great attitude and interesting persona.  So when I saw this book was available to request I jumped on it!

Just as a general overview the feel of the book, the cover and the format are quite nice.  They look like quality and promote a sense of I want to read and know more!  This is the first time I received a book for review and immediately put it at the top of my TBR pile rather than just keep it in the order I received it.  Not only that, once I started reading I could not stop...in fact I only stopped to run out to my parents and share a story that had me giggling or tearing up.  What a life, love and adventure it seems that Joan's life and relationship with her daughter, granddaughter and friends embodied.  While many stories were cute (the kid mafia in Vegas, the bathroom germs (legit concerns people and more) my favorite parts were those involving Melissa as an adult and Joan's relationship with her and Cooper.

This is a beautiful, funny and sentimental testimony to the way Joan and Melissa were to us, the public, as well as the bond they shared together as family.  Melissa wrote a fantastic book with great antidotes, passages, essays and more that had me experiencing shock, laughter, awe and tears.  To an ardent fan these may be repeats, I do not know, but just thinking about them today has had me smiling and thinking what a lady, what a family and man I bet people loved meeting her/them! I know from how much I have thought about it upon finishing it in one sitting that this is a favorite book of mine, that it will make my monthly and yearly favorite round up and that I am already looking to read the other books mentioned.   I cannot imagine having to experience the decisions Melissa did regarding her mom's passing, but I also cannot imagine a more thoughtful, loving and personal way of honoring Joan and sharing her with the public that loved her and them both.  Obviously I highly recommend this book.


Disclaimer: "I received this book from Blogging for Books for this review." All thoughts and opinions are my own.
blogging for books books review