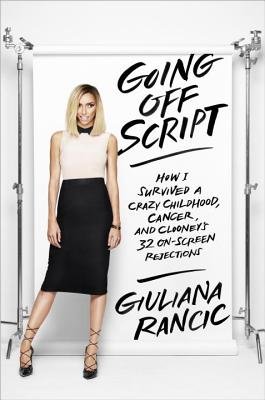 Book Summary (Per Goodreads)
Giuliana Rancic is best known for interviewing A-listers on the red carpet and E! News, skewering their shocking style choices on Fashion Police, and giving viewers a front row seat to her marriage and family life on her reality show, Giuliana & Bill. What fans may not know is that she learned English from Eddie Murphy, got her American citizenship so she could be a beauty queen, and used to have a bad habit of stealing cars for fun. Giuliana bares this and so much more in her hilarious, warm, and inspiring memoir, Going Off Script. From a young age she dreamed of being a TV anchorwoman but, because of her inclination toward mischief and away from schoolwork, her path to her dream job was far from straight. After a fateful (and mortifying) encounter with the late Senator Ted Kennedy, she learned that Hollywood news was where she belonged. Thankfully for readers, this epiphany led her to a bounty of LA misadventures (featuring notables such as Johnny Depp, Leonardo DiCaprio, and Russell Crowe) and an entertaining behind-the-scenes perspective on what our favorite celebrities are really like. In spite of her glamorous Hollywood life, however, Giuliana could not escape some rockier times, including her battles with infertility and breast cancer. Here, for the first time, she reveals the whole truth behind her well-publicized struggles, and the highly controversial decisions she had to make. And, of course, at the heart of it all are the two loves of her life who keep her strong through everything, her husband Bill and her son, Duke. Candid, funny, and poignant, Going Off Script is an autobiography that proves you don’t always have to follow the rules to get the life you’ve always dreamed of.

My Thoughts
A swift read that brought chuckles, grimaces, empathy, tears and admiration.  I enjoyed learning about a person that previously I just thought shared gossip news on E!.  I knew she had other shows and had experienced cancer, but I was not aware of the majority of information or situations that this book brought into light.  Her openness with her relationship to Bill, path to becoming a mom, learning about and handling cancer, etc. were admirable and so open that I felt like I was talking to a friend.  Her use of inserting parts of her journal was brilliant.  I loved the writing style, parts of conversations from her co-workers, friends and family and her internal dialogue of how she made decisions.  It was fascinating reading her concerns about being Italian and feeling behind in class where I always grew up wishing I was an American, but with a European or something exotic background because I loved the accents, the facial features, etc.  I guess one always is wondering about the other side/way/etc.

That does not mean that I thought the book was flawless though.  I am not sure if it was what was shared or how it was shared, but parts of the memoir were difficult to accept was real or if real wonder how this really paired with the Giuliana that America knows.  Her discussion about Officer Pervy, stealing cars, stalking men and having co-workers go with her and her approach of how all three kids ran all over their parents were concerning/appalling at times and confusing at others.  I also am and was conflicted on how she wrote about her relationship with Jerry.  I did not know they had dated, but any time I read or hear something about someone I also feel awkward if the person does not have a platform to share their position.  However, I do not know how the relationship with Bill could have been shown correctly if it was not shared..hence conflicted.

Would I recommend this book? most certainly.  I was not a big watcher of the the shows before, but I will check them out now.  I admire what all G has accomplished and the grace with which she has done so. If you like biographies, fashion, gossip, relationships, struggles, etc. I think you would enjoy this book and learning about Giuliana.

Disclaimer~ I received this book from Blogging for Books in exchange for an honest review.  All thoughts and opinions are my own.