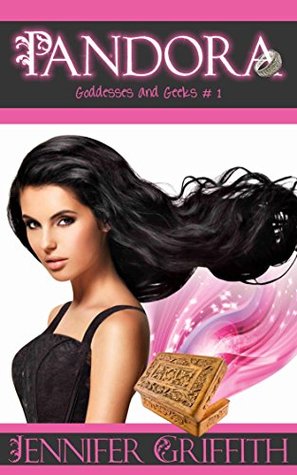 Book Summary (Per Goodreads)
Blake Wells seems to have it made: the wealthy bachelor life, Kennedy-esque good looks, rising political star. The tabloids love him. But one barracuda date after another drains his hopes for finding a girl who’s sincere. So when his Chief of Staff insists he take a beach vacation, Blake doesn’t go expecting to meet Cressida, the perfect girl. Shazam! She’s seriously a goddess. And even though she protests that she’s bad luck, he’s a goner. But when a string of crazy (albeit hilarious) coincidences threatens to sink his career, Blake must choose whether to save his campaign or save the love of his life. If he wants to get this goddess, he’ll have to break her curse. PANDORA is the first installment in the Goddesses & Geeks series by best-selling contemporary romantic comedy author Jennifer Griffith.

My Thoughts
It was a fun romance.  The mythological spin was interesting, but for fans of mythology it will probably deter you from enjoying the story.  I know a little, but not a lot, of mythology so for me it connected close enough that I enjoyed the play off of mythological events and gods without getting down into the nitty gritty of the facts for this story.  I thought the idea behind the reversals of luck was genius.   I enjoyed Blake's change in character from his job being his main priority to this new woman (though at times it did seem purely off of appearance and sexual chemistry).  I thought the humor (conspiracy theories always entertain me) and relationships between all the characters was the best part of the story.  Overall it was an entertaining read and a unique twist to a mythological and romantic story.