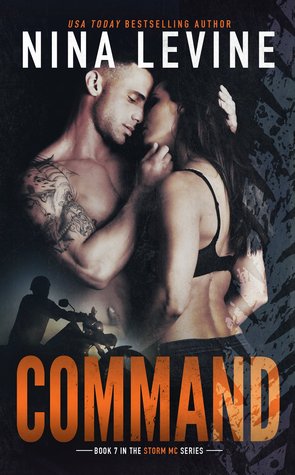 The Storm MC is a club in crisis and their new President, Scott Cole, has declared war on their enemy. As Scott takes command, the MC is thrust into the biggest battle in their history – a battle to not only save the club, but the lives of its members.

Harlow James stands behind her man as he takes charge. She’s determined to prove she can be the woman he needs. However, somewhere along the way, she’s lost a piece of herself, and she fights to be strong for him when she feels anything but strong.

As the club descends into chaos, Scott and Harlow are pulled in opposite directions while they try to protect everything that is important to them. Their relationship is tested in ways it never has been, but they cling to the faith they have in each other.

Is faith enough to get you through when all appears to be lost? For Scott and Harlow, it may be the only thing that, in the end, will save them and the club.

My Thoughts
I am a fan of Harlow...now.  I thought she was sweet or precious in the previous books and my heart ached for what she endured in her story-line, but I did not really like her or see her as a good fit for Scott...until this book!  I loved seeing her inner strength come out and her fight to be her own woman again.  This book, to me, was more about Harlow and her POV rather than Scott (though he clearly has a lot of parts in this book since he is dealing with MC issues).  The only eh I had was, I am not a fan of this cover.  I don't know why, but I just didn't think it fit the book so great.  Silly, I know.

I thought the way all of the drama came together in this book was quite fitting for the series and individuals.  I liked that everyone's issues were mostly settled, but that there was still room for NL to bring us back for updates, other chapters of the MC, potentially other members of the MC and more.  This story put an interesting twist and issue into the conclusion that I did not see coming, but thought was brilliant.  If you read this series for the violence, sexual components, language, drama, family dynamics and more you will not be disappointed!

Prior to seeing an ad for a free book (Storm) I had not read or heard of NL, but I am so glad I saw that ad because this series and author are amazing!

Disclaimer~ I bought this with my own money!