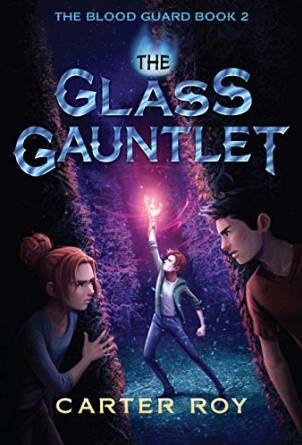 Book Summary (Per Goodreads)
Ronan Truelove barely survived his first encounter with his father and the Bend Sinister. Now, he’s determined to become one of the Blood Guard, a sword-wielding secret society sworn to protect thirty-six pure souls crucial to the world’s survival.

Eager to prove he’s got what it takes, Ronan is sent on his first mission with his friends Greta and Sammy to visit a weird-sounding school and take a series of tests called the Glass Gauntlet. Paper and pencils and nerdy scholarship—where’s the life-or-death challenge in that?

But the Glass Gauntlet is actually something much more dangerous: head-to-head competitions against ruthless opponents. Nothing and no one are what they seem. Who can he trust, and who will kill him? Ronan has to figure it out fast because his enemies are multiplying, and soon he will have to pass the ultimate test: facing his father again and standing up to those who threaten not only him and his friends but also the world.

My Thoughts
The twists in this book...yowza...

I enjoyed the first book in this series, but I loved this book!  Now that I had a better understanding of the world at play, the characters, the dynamics, etc. I was able to fully focus on the adventures and try to figure out who or what was going to appear next.  Was I successful in my guesses, nope..but that is what I loved!!  The surprise guest (hopefully a reoccurring character now) blew me away.  I mean talk about a 180 in my opinions and emotions!

This book seemed more descriptive to me which I enjoyed.  I could picture this house, the maze, the dogs and this soul type device. Then there is the gauntlet..I think that was the neatest, but trickiest thing to visualize.  Is it like Michael Jackson's glove? A glimmer like in Twilight (which I thought was disappointing compared to the book description), understated due to its power like Lord of the Rings? or would a movie be able to really capture this idea of a glass glove that can do all it describes in the book.

I am not a big fan of cliff hangers and so far I am loving how this series addresses all issues covered in the book, but still sets me up to know there will be another book.  This is also done in a way that hints at what the next book will be about (at least in my mind..we shall see when book three comes out!!)  Yes, I will most certainly continue on this series and I would recommend this series to those who enjoy adventure, children or YA literature, mystery and more.

*According to an answer in Goodreads, book three, which has a "provisional" title of " The ______Bridge", is expected in summer of next year.*  Fingers crossed because I am ready to read more about Ronan, Greta, Jack and others (Especially Jack! love him and his sarcasm/wit).

Important Links
*Review to book one in this series can be found here.
Author
Goodreads
Twitter

Until my next post..love ya'll!!