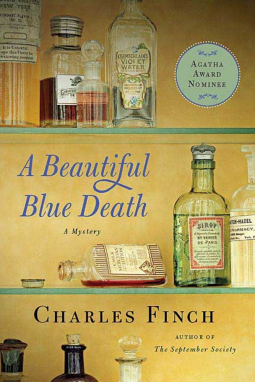 Book Summary (Per Goodreads)
Charles Lenox, Victorian gentleman and armchair explorer, likes nothing more than to relax in his private study with a cup of tea, a roaring fire and a good book. But when his lifelong friend Lady Jane asks for his help, Lenox cannot resist the chance to unravel a mystery.Prudence Smith, one of Jane’s former servants, is dead of an apparent suicide. But Lenox suspects something far more sinister: murder, by a rare and deadly poison. The grand house where the girl worked is full of suspects, and though Prue had dabbled with the hearts of more than a few men, Lenox is baffled by the motive for the girl’s death.When another body turns up during the London season’s most fashionable ball, Lenox must untangle a web of loyalties and animosities. Was it jealousy that killed Prudence Smith? Or was it something else entirely? And can Lenox find the answer before the killer strikes again—this time, disturbingly close to home?

My Thoughts
Agatha Christie, Murder She Wrote and Matlock all came to mind while I was reading this story.  Now the story does take place in the 1800's so a bit before their times, but the "amateur" detective who is so smart, finds the clues,  trusted by others, the inquisitive nature, etc. all had me thinking and enjoying the connection to the above murder mystery selections.  The writing style of this story was fantastic!   It kept me engaged and I truly never knew who I thought the killer was because each time I knew, a new detail emerged that flummoxed me (perhaps I would not be a detective of Lenox's caliber).

I did have a few issues with the story in that I could not read it in one go, but perhaps that is the best because I would have missed some details.  Another issue I had was the apparent lack of keeping with the formalities that so many other Victorian stories swear by.  Now if it was one character perhaps, but it seems like no one in this book kept to the traditional strict Victorian standards.  Even then though it wasn't too much of an issue for me because my favorite relationship thus far is Lenox and Graham.  I thought their camaraderie was touching and the background story heartbreaking. However, those issues (or non-issues) aside, I thought the book and the characters were delightful.  I enjoyed the aside comments that show how future investigations will play out and the possibility of a romance or more than just friendship with Lady Jane.  I also wonder if Lenox will ever get his trip and if his brother starts to accept the recognition that he apparently deserves.  I found myself chuckling over some scenes such as seeing the face in the window over the greenhouse or finding the perfect boots! Finally, I think the title is brilliant and I do not care for the cover...at all.  With such rich descriptions on the poisons and flowers I just saw more potential for a captivating cover.

For those who like the "who done it" stories or the twists and turns of a game like "clue" I think you would enjoy this book immensely.  For those who need to read a book cover to cover or who do not enjoy paying attention to the details, you may not enjoy this story as much!  I personally look forward to seeing Charles and gang on more adventures (maybe even on one of his grand trips)!