Bodies on the Potomac by Daniel O'Neil, Book Review 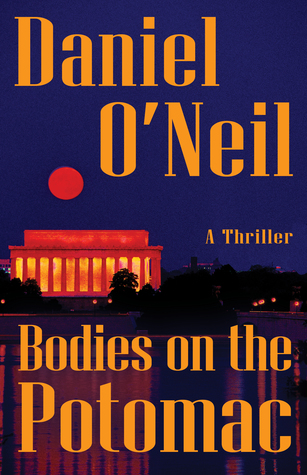 Book Summary (Per Goodreads)
Karl Blumenthal’s Bluffton, South Carolina automobile dealership is being terminated by Universal Motors. He believes it’s because he’s failed to financially back the reelection efforts of the sitting US president. For guidance, Blumenthal calls on good friend and former Washington power broker Taylor Clark. But Clark is skeptical. However, when a live round fired from a silenced pistol narrowly misses him, Clark begins to fear the worst—that the country could be on the edge of the messiest national scandal since Watergate. Clark immediately engages his boss, Loraine Sinatra, a feared Washington operator who secretly controls a black unit buried deep within one of America’s least understood but most powerful and autonomous law enforcement organizations. Clark and Sinatra search desperately for footing in the investigation, tapping sources they haven’t called on for years. When they arrive seconds too late to prevent a firearms confrontation on Blumenthal’s front lot, it becomes clear that a national catastrophe looms. It isn’t long before they discover that Bluffton is nothing more than a single speck in a bold scheme masterminded by Russian billionaire Mikael Azarov to bend the president of the United States to Moscow’s will by seizing control of Universal Motors for himself. Azarov’s daring plot places his $25 billion fortune at risk—but he has killed before, and he’s willing to kill again if that’s what it takes to win. It’s up to Clark to stop him. From the Lowcountry of South Carolina to the halls of power in the nation’s capital, from the skyscrapers of San Francisco’s famed financial district to the stormy streets of flooded Savannah, Clark’s resourcefulness and nerve fuel his pursuit of the truth—a pursuit that ultimately ends in violent public death. A work of fiction, Bodies on the Potomac is pure entertainment that will leave the reader wanting more.

My Thoughts
Every time I thought I had this figured out...I was wrong and I loved it!  This thriller is action packed and covers a wide range of characters, locations and conspiracies. I am tied on who my favorite character is which is great because there are so many well developed individuals who comprise a very sneaky and smart group.  Rasey and Calloway are the the epitome of the idea for not take anything or anyone for granted. I actually disliked both of these characters at first, but near the end of the book several actions take place that made me re-evaluate the story and their roles!  My favorite scene is a tie between Calloway and Lorraine's conversation near the end of the book,  when Clark's girlfriend demonstrates her driving prowess under pressure or the dialogue between Rasey, Clark and Carmen after finishing at the restaurant.

The plot is very well developed and each facet has depth that enriches the story and its characters.  I finished this book several weeks ago and still when I reflect on this story I am blown away by how many different moving pieces were running different schemes or goals along Clark's path of finding out answers to his friends and the nations problem.  I had never thought about the importance of car dealerships or campaign finance in these lights, but you will question it after reading this story!

The cover of this book stands out to me and I have to share why!  When I look at this cover I think of NCIS and its credits.  To me it epitomizes Washington, DC and politics which helped build the atmosphere before I started reading.  When I finished reading this book and while reading it I kept wondering could this happen? With the focus today on corruption and lack of government transparency, it is interesting to think about. If you enjoy fast-paced, action packed thrillers that will have you guessing from cover to cover you will want to check this story out.  I enjoyed this book and hope to see Clark, Lorraine, Rasey, Calloway again in more adventures!


Disclaimer~ I received this book in exchange for an honest review.  All thoughts and opinions are my own.

Until my next post...love y'all!!
books review