A Shiver of Light by Laurell K Hamilton, book review 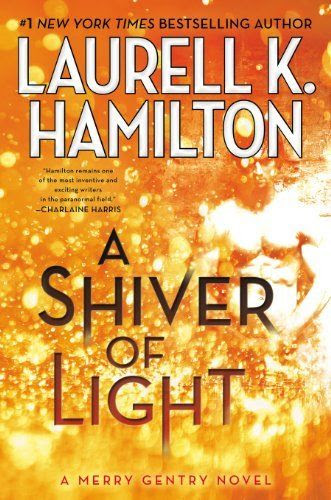 Book Summary (Per Barnes & Noble)
I am Princess Meredith NicEssus. Legal name Meredith Gentry, because “Princess” looks so pretentious on a driver’s license. I was the first faerie princess born on American soil, but I wouldn’t be the only one for much longer...
Merry Gentry, ex–private detective, now full-time princess, knew she was descended from fertility goddesses, but when she learned she was about to have triplets, she began to understand what that might mean. Infertility has plagued the high ranks of faerie for centuries. Now nobles of both courts of faerie are coming to court Merry and her men, at their home in exile in the Western Lands of Los Angeles, because they will do anything to have babies of their own.
Taranis, King of Light and Illusion, is a more dangerous problem. He tried to seduce Merry and, failing that, raped her. He’s using the human courts to sue for visitation rights, claiming that one of the babies is his. And though Merry knows she was already pregnant when he took her, she can’t prove it.
To save herself and her babies from Taranis she will use the most dangerous powers in all of faerie: a god of death, a warrior known as the Darkness, the Killing Frost, and a king of nightmares. They are her lovers, and her dearest loves, and they will face down the might of the high courts of faerie—while trying to keep the war from spreading to innocent humans in Los Angeles, who are in danger of becoming collateral damage.

My Thoughts
I am an avid Laurell K. Hamilton reader.  My sister introduced me to her writing a few years ago and since then I have been hooked.  LKH has two main series, each are very different from the other, but they both are fantastically addicting.  In this series Merry is the main character.  She is strong, feminine, ruthless but sentimental, smart but naive...literally the character development of Merry is mindboggling, but so important to how a series can surround her and keep one intrigued.

This might be one of, if not tied for my favorite, Merry books.  In all reality, if a certain character did not have a tragedy in this book it probably would be my favorite.  As it is, this book is tied for favorite with the scene where Merry leads the hunt and finds a way to bring Frost back from death.

In this book we see Merry making changes to how she lives with her men, that some of her men are not really adapting or accepting that she loves them differently, how to handle children and we get to see the men as fathers!  I loved the descriptions of the children, the powers they were already demonstrating and the seeds of hints in future books about the adventures and problems that these children might encounter!  I mean the ability to mesmerize everyone even the FEY!! holy wow and only a few days old.

While I was upset over a certain scene (I mean really such joy and self acceptance right before!!) I was even more touched and entertained by the loyalty and ruthless following/acceptance of the The Wild Hunt.  I do think the story could have encompassed more action or information because the majority was how Merry was adapting to the children, who was the dad, etc.  But I did love seeing how the men reacted to fatherdom, how she fought back against her uncle (great writing of those scenes) and how she avenged the tragedy that took place near the end. (this was my favorite part!.well that and who was changing diapers!!)

Disclaimer: I borrowed this book from the library.  It was not given to me for any reasons, I just am reviewing it and reading it due to the love I have of this author's work.