I was not sure what to think about this movie.  I always watch Dwayne Johnson movies (The Game is my favorite..closely followed by his character in the Fast and Furious series.)  However, the trailor for this movie was just a bit to ehh for me.  I didn't think some of it looked feasible let alone something from mythology...or it might just be my reflection from watching the Hercules TV show as child..who knows.

Pros~
*The Character Autolycus...I adored him.  The dialogue, his delivery of his lines, he was my favorite character in the whole movie.  In the part where he said he saw his time coming, I was devastated (just for a bit though!)
*Dwayne Johnson does a fantastic job.  Every time I see him in a movie I am very impressed with how well he embodies his character.  He is always believable in his roles and owns his roles.  I will admit I did not find it a stretch to see him as Hercules because of his physical size and strength, but watching the movie, especially when chained I was in awe of the extent of his acting chops.
*The battle scenes and their details were very cinematic.  At times I had to look away because of the animals being "harmed" (I say it b/c only harmed in appearance), but even then that was essential to show the strength and ability of the troop and its leader Hercules.
*The female role was exquisite.  She was feminine but showed her strength in a role where usually women were seen as wrenches or as ladies/royals to only be seen and not heard.  The scene where she turns and shoots the items from the guards arms was one of my favorite!
*I enjoyed seeing the whole team work together to enhance the legend of Hercules, have each others backs,etc.  I loved the humor given rather than the respect to the story-teller/nephew.

Cons~
*I did not think the trailer really showed what this movie was about.  I was expecting more a mythological twist/take on the movie.  Not using mythology as a marketing ploy for mercenaries to earn money?
*It would have been nice to understand more of the side relationships between Hercules and his "sidekicks".  I  know a little bit was given when they were asked if Hercules had killed his family, but it would have been nice for more detail since later we have lines where they are saying they would die for/with him. 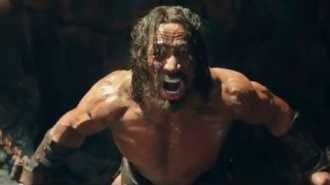 Memorable Quotations
Hercules: Do we die in this battle?
Autolycus: My time’s not come yet. Not sure about yours.

Amphiaraus: No matter how far you go, man cannot escape his fate. Who are you? Are you a murderer? Are you a mercenary who turns his back on the innocent? We believe in you! We have faith in you! Remember the deeds you have performed, the labors you have overcome! Are you only the legend, or are you truth behind the legend? Now, tell me, WHO ARE YOU?
Hercules: I AM HERCULES!

Overall I enjoyed this movie a lot more than expected.  I should have known it would be entertaining since it was starting Dwayne Johnson!
Have you watched it? Other Hercules movies or shows?  How did you think it compared?  Do you have a listing of your favorite Hercules actors?