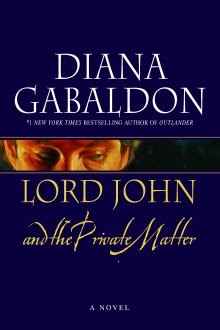 Book Summary (per Goodreads):
Now one of these characters, Major Lord John Grey, opens the door to his own part of this world — eighteenth-century London, a seething anthill of nobility and rabble peopled by soldiers and spies, whores and dukes. Great Britain is battling France for supremacy on three continents — and life is good for a soldier.The year is 1757. On a clear morning in mid-June, Lord John Grey emerges from London’s Beefsteak Club, his mind in turmoil. A nobleman and a high-ranking officer in His Majesty’s Army, Grey has just witnessed something shocking. But his efforts to avoid a scandal that might destroy his family are interrupted by something still more urgent: the Crown appoints him to investigate the brutal murder of a comrade in arms, who may have been a traitor.Obliged to pursue two inquiries at once, Major Grey finds himself ensnared in a web of treachery and betrayal that touches every stratum of English society — and threatens all he holds dear. From the bawdy houses of London’s night-world to the stately drawing rooms of the nobility, and from the blood of a murdered corpse to the thundering seas ruled by the majestic fleet of the East India Company, Lord John pursues the elusive trails of a vanishing footman and a woman in green velvet, who may hold the key to everything — or nothing.The early days of the Seven Years War come brilliantly to life in this historical mystery by an author whose unique and compelling storytelling has engrossed millions of readers worldwide.

My Thoughts
I liked this book, but did not love it like I have Claire and Jamie's story thus far (remember I am reading in chronological order!).  I thought this story was much better than the first novella regarding Lord Grey as this story answers all the questions, completes the purpose of the story and opens up the path for the next adventure of Lord Grey.  As always the writing is rich, complex and very descriptive.  I felt I knew the characters, could see the locations, outfits, etc.  I appreciated the realism given the scare and horror of having the pox and thought it was a genius way of showing medicine and science in the book through the malaria approach.  I enjoyed the introduction of more characters and hope to see more of Lord Grey's mom (she cracks me up).  Also the title entertains me immensely upon completing the story!

So why did I like and not love the book..well it sounds silly, but I felt it was rushed.  There were so many descriptions and details and location and somehow it just was like fixed within a blink of the eye.  Also I, as I mentioned before, thought it was odd that so many of the men that so many people know, enjoy other men but it is all nudge nudge wink wink.  A more historical approach to addressing if this is factual, just fiction, etc. would be informative.  I do appreciate the information at the back of the book that describes where the information such as the lavender house, mollies, etc. comes, but it just seems in Lord Grey's stories that the majority of men like men and nothing else. My confusion could be that most of my reading from that era has been romance where it is the dashing lord, the strong debutante, etc., but who knows, it does add to the story line and tie Lord Grey back into the Fraser stories!

Would I recommend this book?  Most certainly I think it is well written, richly detailed and creates a more descriptive environment for us to imagine Lord Grey and the Frasers!

Disclaimer:  I borrowed this book from the library!  All thoughts and opinions are my own.