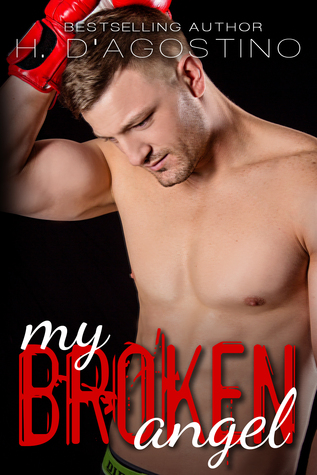 Weston McKay has always worn the title proudly. He’s stood by Cole and Angela Walker since they were kids. He’s always been there to help pick up the pieces, always been a shoulder to lean on, and someone who understood.

At the tender age of nine, Angela knew that her friendship with Wes was destined to be more, but he was her brother’s best friend and five years her senior.

Time passes, unrequited feelings grow, and one day, five years doesn’t seem like that big of a deal anymore. Wes is everything she's ever wanted and then some.

What happens when Wes finally sees Angela as the woman she’s become? Will their past make them stronger? How will Cole feel when he realizes his best friend wants his sister? Can friendships endure? Can love survive what waits ahead?

Can the future survive the past? Secrets are revealed and friendships are tested in My Broken Angel- book 3 in The Broken Series.

My Thoughts
Overall this is a very solid good romantic read.  I posted last week about the release of this story(you can check that post out here). Parts of the story I absolutely loved, parts I liked a whole lot and then there were a few things that just tweaked me a bit oddly.  Why I am not sure.  The story line itself is fantastic.  I loved seeing the relationship between Wes and Angela, Wes and Cole, Cole and Angela, Angela and Ally, and then the overall relationship they all share!  The characters felt relate-able and realistic.  I could see a brother having a hard time with their best guy dating a younger sister (though isn't that what all younger sisters hope to find in their older brothers friends?!?!)  The steamy scenes were hoootttt and the sweet scenes could make me smile or tear up.  I loved that there were twists and turns throughout the entire story..hello father of the baby, the ex-manager, the random baby from a friend, the father's death and more all threw me, but were placed perfectly into the story.  My favorite was the story and development of Wes...I mean to rise to that height, get played that dirty by the ex-manager and then to create a gym for his reasons and love of Cole and Angela AND then to have his story with Angela..pheww..he is an alpha and loveable male for sure!

So with all that goodness what did I find odd..well at times the story read as if the characters were older because they had lived through so much (mainly thinking of Angela), but then there would be scenes where she came across very young, insecure or almost a bit of a spoiled person.  Now that thought would quickly disappear because the next scene would be so supportive and caring of her brother, child to be, Wes, etc., but there were some lines where I was like umm not feeling Angela.

Lastly I enjoyed the author's writing style.  It made for a very smooth, enjoyable and quick read.  This is the second book I have read from this author and I plan on reading more as both have been entertaining and well done!


Here is the Book Trailer for this story (loving that book trailers are becoming more accessible for authors..they are so fun!)


Disclaimer~  I received this book in exchange for an honest review.  All thoughts and opinions are my own!
books review