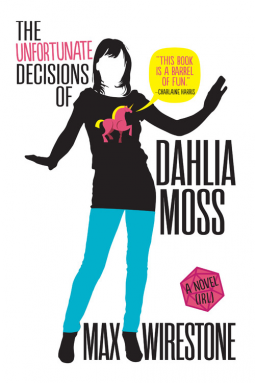 Book Summary (Per NetGalley)
The odds of Dahlia successfully navigating adulthood are 3,720 to 1. But never tell her the odds.Meet Dahlia Moss, the reigning queen of unfortunate decision-making in the St. Louis area. Unemployed broke, and on her last bowl of ramen, she's not living her best life. But that's all about to change.Before Dahlia can make her life any messier on her own she's offered a job. A job that she's woefully under-qualified for. A job that will lead her to a murder, an MMORPG, and possibly a fella (or two?).Turns out unfortunate decisions abound, and she's just the girl to deal with them.

My Thoughts
A murder mystery where I kept forgetting there was a murder? The situations Dahlia finds herself in remind me of Stephanie Plum.  I enjoyed this book, but I didn't love it.  I thought the ending was fantastic and I did not see the murderer coming.  In fact, for a second I had to check who the character was because I thought it was someone else.

The reason I did not love the book is that parts of it drug along to where I put the book down just to take a break. The story line was good, the characters well developed, just there was something that made this not be a non-stop read for me.  Perhaps it was me putting the book down, but several times I had to back track to figure out where I missed something.  There was also a lot of talk about the gaming component which was hard for me to stay engaged in as I am not a gamer, though I must say the world does sound addictive. I also wish there was more done or provided about the dentist hygienist because I did not see that conversation taking place...well done on that twist..well done!

I most enjoyed her route to friendships (the final scene was lovely), her relationship with Nathan and the detective (hilarious) and her inner dialogue(who doesn't talk to themselves that way?!?!).  I found my self smiling a lot and laughing out loud at quite a few scenes.  I wish there were pictures for some of the characters and explanations of outfits because they sound fantastically horrible from the descriptions and Dahlia's reaction.  I hope there is more with Dahlia and gang because I want to learn more about the roommate, the detective and see how her relationship goes!  This seems like a very eccentric group that many people could enjoy.

Disclaimer~ I received this book in exchange for an honest opinion.  All thoughts and opinions are my own.

Until my next post...love y'all!!
books NetGalley review