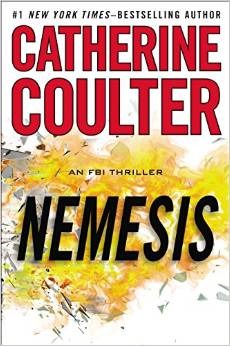 Book Summary (Per Goodreads)
When Special Agent Lacey Sherlock foils a terrorist attack at JFK airport, she thinks her job is done and turns the reins over to the New York FBI. But stopping the grenade-carrying crazy was only the beginning. Another plot unfolds nearly simultaneously with a bomb at St. Patrick’s Cathedral. The terrorist at JFK refuses to speak to anyone but Sherlock. She heads back with counterterrorist Special Agent Cal McLain to try to get him to talk. Meanwhile, Savich—with the help of Agent Griffin Hammersmith—has his hands full trying to track an elusive murderer who looks like a Hollywood Dracula. When Dracula’s attempts to kill Savich collide with Sherlock’s terrorist case, very strange things happen.Who is really behind the bombing attack at St. Patrick’s? How does Savich’s mysterious killer fit into Sherlock’s terrorism investigation? Savich and Sherlock race against the clock, as more lives are in danger with every passing minute.

My Thoughts
Savich and Sherlock are true relationship goals.  I love the whole FBI series by Catherine Coulter, but the books and scenes that include Sherlock and Savich are always my favorite.  They are hilarious, endearing and so well written.

This adventure shows two different cases being worked and new relationship in the mix.  I loved meeting Cal and thought he was fantastic.  I hope to see more of Cal and his NYC adventures ..perhaps with Nick?!?!  A terrorist case that has Sherlock in the media and being her feisty self (seriously she is such an amazing strong female lead) and a multiple homicide case with paranormal leanings for Savich.  Both cases stay separate, but due to S&S relationship we get insight into their dynamic, their family and both cases.  Out of the two cases my favorite was the terrorist case and how the agents worked that out.  My heart about jumped out of my chest over the wedding scene in England...tears were in my eyes, I was "oh no" all over the place. Brilliant writing by CC.

I missed seeing them work together because I do enjoy the scenes with them as a family, but I thought it was very creative to show them this way and to introduce us to more of the NY office. Another aspect of CC's writing that I take for granted, but only because it is so good, is that there are always well developed, funny and charismatic characters that I want to know more about..aka the Father who punted the bomb away from his cathedral.


Until my next post...love y'all!!
books library review