The Custom of the Army by Diana Gabaldon, Book Review 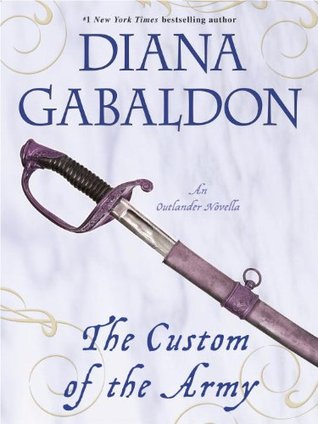 Book Summary (Per Goodreads)
London, 1759. After a high society electric-eel party leads to a duel that ends badly, Lord John Grey feels the need to lie low for a while. Conveniently, before starting his new commission in His Majesty’s army, Lord John receives an urgent summons. An old friend from the military, Charlie Carruthers, is facing court-martial in Canada, and has called upon Lord John to serve as his character witness. Grey voyages to the New World—a land rife with savages (many of them on his own side) and cleft by war—where he soon finds that he must defend not only his friend’s life but his own.

My Thoughts
Yes!!  I finally am back to reading about the Outlander world!  I got bogged down in work and other new releases, so I stepped away from my chronological voyage of DG works, but I got to read another one over the holidays and still so good!

This is a novella where we see Lord John in another odd situation.  A duel where a man died and perhaps a marriage is in the works, but literally an eel is to blame?  Then we have an Indian, a war and an illegitimate child also enter the picture for another great adventure with Lord John Grey and his squad!  This is a super fast read and I appreciated the information in the back about what was factual and what was some artistic license about the events.  This book had me laughing and enjoying the flashbacks to his time in Scotland, his childhood and past romantic episodes.  I was left with some confusion regarding the ending since it seemed like there was a battle and smallpox at the same time.  Is Stubbs alive?  As with all DG novellas or shorter novels, I enjoy them but do find them a bit rushed towards the end. She has such a descriptive way with words that sometimes I feel like the story just got chopped somewhere in the middle on these novellas.

I am so glad to be back in the Outlander world and can't wait to move on to the next adventure that DG has in store for us!