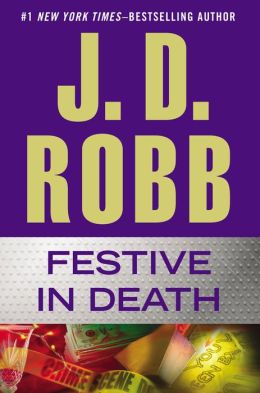 via
Book Summary: (Per the author's website)
Personal trainer Trey Ziegler was in peak physical condition. If you didn't count the kitchen knife in his well-toned chest.
Lieutenant Eve Dallas soon discovers a lineup of women who'd been loved and left by the narcissistic gym rat.  While Dallas sorts through the list of Ziegler's enemies, she's also dealing with her Christmas shopping list- plus the guest list for her and her billionaire husband's upcoming holiday bash.
Feeling less than festive, Dallas tries to put aside her distaste for the victim and solve the mystery of his death. There are just a few investigating left before Christmas, and as New Year's 2061 approaches, this homicide cop is resolved to stop a cold-blooded killer.

My Thoughts
As a standalone book or as part of a series this is a 5 star book.  J.D. has developed the characters and their relationships even more in this book in what her readers can only see as a natural progression. The details, one liners, laugh out loud moments and poignant scenes were as readily available as normal.  Additionally her attention to detail and maintaining the police procedure, thoughts and by plays; as well as, the personal relationships were on point.  All scenes in this story felt as though I could see it happening in real life or a cinema screen.

The In Death series takes place in the future and mainly in New York City, though they do travel to other cities and planets (again this series takes place in the future).  This series follows Eve Dallas, the main character, as she goes from a solo act to having a husband and select crew that are always on hand to help solve serious crimes in their grand city.  The story also follows Eve as she continues to grow into understanding and having personal relationships.  The humor is evident in the beginning of the very first story as her love interest is a thief (former) and her best friend is a grift artist (former).

This book was somewhat different from the others in this series because it seemed the focus was on Eve's relationship rather than the crime in this book.  To me, at least, the other books had their relationships visible and as a crucial part of the storyline, but not the headliner of the story.  This time though, I was more involved in wondering what presents happened, the joy and interplay between characters, the details of the party, etc. then I was about who the murderer was (which might be why I thought it was apparent who the murderer was very soon in the book.)

With that being said, in case my review didn't show it enough, this is definitely one of the top favorite In Death books for me!  If you are looking to fall in love with characters, root for their successes, laugh over the jokes and stories, grimace when certain situations arise, feel sorrow for them when they suffer and embark on a series where you will enjoy seeing the characters and their relationships evolve this book, series and author is for you!

Memorable Quotations
“A banner hung over the break-room door, facing out so any who came in would see the sentiment:


NO MATTER YOUR RACE, CREED, SEXUAL ORIENTATION, OR POLITICAL AFFILIATION, WE PROTECT AND SERVE, BECAUSE YOU COULD GET DEAD.”

“Eve bit into some bacon -- honestly, good sex, a hot shower, then bacon? Did a morning get any better?”

"You get stunned or stuck or blasted, it's pretty damned inconvenient for me." On Peabody's watery laugh, Eve sighed. "You're ...family. That's it."

“Well, stop it or . . . Crap, is that Drunk Santa currently mooning passing traffic?”
“Wow, that’s some ugly ass he’s got there. It is Drunk Santa. Oh, please, do we have to stop? Think of the smell. Fear it.”
“We can’t leave that ugly ass hanging out on Ninth Avenue.” Resigned, Eve started to pull over, then spotted two hustling beat cops. Pitying them, she kept going.
“It’s a Christmas miracle,” Peabody said, reverently.”

"You don't like me yet, but you will..  I'll grow on you."
"What? Like mold?"
DeWinter threw back her head and laughed, full and throaty. "Possibly, and I suspect you might do the same on me because I don't like you yet, either. We'll see. What I do know, absolutely, is you're his friend.  You're Li's good, strong friend.  I can promise you I'm his friend. So that's a beginning.

"And it appears to me she's just given you a celebrational way of saying kiss my ass.  It's you, darling. Absolutely you."

I was not paid to review this book.  I purchased this book on my own as I am an avid reader and love J.D. Robb's books!

Genre: Contemporary Romance/MC Release Date: August 3, 2016 Blurb Morrison “Shadow” Griggs, VP of the Cerberus MC, is a force to be reckoned with. Women fall at his feet, willing to do almost anything for a night with him. Misty Bowen is the exception. She’s young and impressionable, but with her religious upbringing, she’s able to resist Shadow’s advances… for a while at least. Never one to look back on past conquests, Shadow is surprised that he’s intrigued by Misty, which only grows more when she seems to be done with him without a word. Being ghosted by a twenty-one-year-old is not the norm where he’s concerned, and the rejection doesn’t sit right with him. Life goes on, however, until Misty shows up on the doorstep of the Cerberus MC clubhouse with a surprise that rocks his entire world off of its axis. With only the clothes on her back and the consequences of her lies and deceit, Misty needs help now more than she ever has. Alone in the world and des