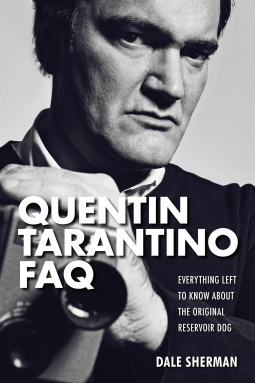 Book Summary (Per NetGalley)
Quentin Tarantino is a man who came to Hollywood and didn't break the rules so much as make plain that he didn't even notice them. Making the films he wanted to see, Tarantino broke through with Reservoir Dogs in 1992 and then cemented his reputation in 1994 with the release of Pulp Fiction. As his fame grew, he spread his love for movies that are far from commonplace through his promotion of older films and theaters and by reviving the stalled careers of actors such as John Travolta, Pam Grier, and David Carradine.Quentin Tarantino FAQ examines the movies directed by Tarantino, the influences on his work, and the inspiration he gave to others. There are also chapters on certain recurring elements in his films, from fake “product placement” to the music, actors, and even cinematic moments used. The book also reviews his work in television, the articles written about him or by him over the years, his acting career, his public battles, and some of the projects he abandoned along the way. It all comes together to tell the story of a man who forged his own unique path and helped shape the way movies are made today.

My Thoughts
A plethora of facts, tidbits and trivia information for the movie buff, Quentin T fan or just entertainment movie historian.  It was amazing the detail and depth of information that this author and book provided.  I also enjoyed and appreciated where the author discussed some information that is seen as in conflict depending on the source.  It was an eye opening and educational foray into the world of entertainment behind the scenes that I had never thought about or read before.

Prior to this book I had only watched a few Quentin Tarantino movies (Kill Bill Vol. 1 & 2, Reservoir Dogs, From Dusk till Dawn and Natural Born Killers) and in full honesty never gave a whit of a thought to how it was produced, paid for, etc.  I had wondered how sometimes it was supported when the movie was very graphic or violent, but there are movies for every entertainment sector (hello 50 shades) so why not?  Ironically the one's I had watched are violent ones and in my household met with mixed reviews..to yes that is amazing to why are we watching it I don't get it.  After reading the information, who played and was potentially going to play roles in the movies, how they stayed true or deviated from the script, etc. I am more interested in watching some more of the Quentin Tarantino movies.  I feel I will definitely have more set opinions on the endings after reading how some directors/producers changed the endings or scenes in the script.

Now, this is not a quick read or an easy read.  This is an educational read with a fun flare in my opinion.  I could not read it straight through, nor should one try because I feel I would have lost some of the history or true fun trivia with each movie if I had tried.  If you enjoy movie trivia, knowing how something was created, the behind the scenes moments and other entertainment knowledge or are just an ardent QT fan I would recommend this book to have and to also pull out when watching a QT movie!  It has been great throwing out some FAQ about movies as I have watched them with friends recently...everyone was like what,...how did you know that!

What do you think of books like this?  What books have you found that really help you enjoy a movie or actor/producer/director/writer more?

Disclaimer:  I received this book for free in exchange for a review.  All thoughts and opinions are my own.
books review